When the nozzle temperature was set to M104 by direct control of the equipment, the result was different from what was supposed, so I tried to summarize.

In fact, at the time of printing, the set temperature of the nozzle bed returned in the following manner.

When the nozzle temperature was set to 100 degrees and the bed to 50 degrees, the following results were returned.

On the FlashPrint side, the result of setting the nozzle temperature at 50 degrees results in the following screen.

The setting temperature on the nozzle side remains 0.This is because the bed temperature in the lower part of the screen shows only the current temperature, and it is judged that the red solid line graph is not near 50 degrees in the graph display section. 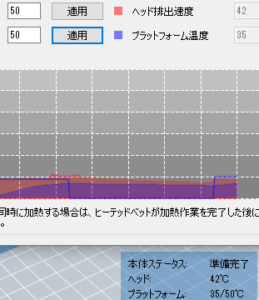 Even when the nozzle was heated in preparation for overheating on the device side, the target temperature of the nozzle remained at 0 in M105.

Perhaps the failure of the nozzle’s target temperature is a malfunction of the farm. I would like to add a new farm, but the changes for each version of the farm are not disclosed, so it is a bit dangerous and can not be entered.

I implemented monitoring of Adventurer3 with Raspberry Pi's Web server.

Modified the content of G code and added the function to output.

We summarized the method of Bed leveling of Adventurer3

I created a program that makes it easier to see the real numbers of slice parameters exported by FlashPrint with a text ...

How to adjust height calibration and global Gcode offset amount

ベッドの水平だし
Adventurer3-ファーム1.3.1でのWi-Fi接続
Find out if Slic3r can be used with Adventurer 3
Adventurer3 Control - 3
射出量・押出率について
Sponsored Link