It’s been a while since Adventurer3 Control – 6.7, but new functions have been added.
In addition, the source of the program has been released along with the addition of this function.
As for the released source, only the source that was originally managed excluding the documents such as Unit Test and specifications is newly managed by git and published on github.

What I added is the support for backlash.
Until now, as a “Lift Size” parameter, the process of lifting by a specified amount when moving the Z axis and then lowering was performed, but in addition to this, a function to lift by biting the offset when raising the nozzle is added. It was an addition.

It may be a royal road in a sense that I added this time, but it measures the distance of play and corrects the Z-axis movement based on it.

The specifications are as follows.

Initially, I implemented a function like “Add play removal command” because it was troublesome to determine this offset value. It comes from the easy idea that you should bring it up to some extent and then lower it.
However, this would cause unnecessary vertical movement, so I wondered what it was like.

The following functions have triggered the improvement of this function this time.

A function that creates a model while really moving the surface of the modeled object in 3D instead of stacking.

It hasn’t been implemented in FlashPrint or Simplify3D yet, but it’s unclear what will happen in the future.
However, when using the above function, I feel that it is not possible to handle it with a function that lifts once, such as “addition of play removal command”, and Z-axis movement considering the offset value makes Z smooth even if there is some play. This is because I wanted a function that could move the axis.

How to determine the offset value

The source is available on github, so please download it, build it, and use it. 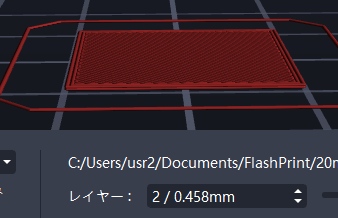 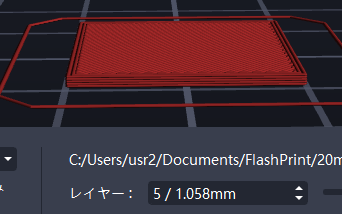 The calculated thickness is a little halfway, and I only have calipers that can measure up to 1/10 mm, so I’m not sure if it’s a meaningful value, but it’s as follows.
The measured location is around the center of the square board.

The offset value decided at the top was 0.29, but it became a little thicker, so when I tried even 0.2 mm, that value was the best.

Therefore, I think that the actual correction value should be further adjusted from the print result.

Also, as far as the above result is seen, it seems that it is included in the build accuracy (+/- 0.2 mm) of Adventurer 3 even without correction.

Survey result of G code command used in interaction with FlashPrint of Adventurer3.

Implemented one bug fix for Slic3r.

Changed the method of searching the IP address of Adventurer3. Previously, it used a private MAC address. After fixi...
Sponsored Link