I investigated the movement of the parameters newly added in Ver5.3.

There are two parameters, “Yes” and “No” and the distance to operate this parameter.

As a result of slicing with some parameters, this parameter did not seem to be applied by Start Print Order “from outer to inner”.

It was “from inner to outer” that the parameter operation was easy to understand, so the difference between the results of outputting Enable Start Point Acceleration with “No” (left) / “Yes” (right) is as follows.
The distance was 50.0 mm.
Since it is a PLA default parameter, the top speed of inner peripheral discharge is F2520.

Looking at the left side above, it is gradually approaching the top speed F2520 until it moves 50 mm.

When I tried changing the distance, the number of speed change stages was divided into several patterns.

It is a little unclear what kind of algorithm will be used for division.
When the distance was set to 10 mm, the speed was adjusted in two steps.

The part where the speed adjustment of this parameter is applied seems to be applied only to the part where one stroke can be written in the inner circumference output part immediately after the comment “; structure: shell-inner”.

When the shell count is set to 3 or more and the inner circumference is output 2 laps, or when the speed adjustment is applied by increasing the distance, the speed after a simple movement without the E command is performed. Is the movement speed specified by the normal parameter.

Just as shown below, the shape is such that multiple inner circumferences are output. 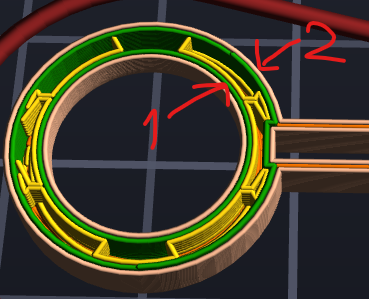 In the case of such a ring shape, since “; structure: shell-inner” exists in each place, the adjustment of the Start Point Acceleration parameter was applied to the inner circumference output immediately after that.

It seems that the situation where the inner circumference output is performed is approximately immediately after the Z-axis movement or a slightly longer movement.
In such a case, the state where the resin is not discharged continues, so the purpose is to slow down the discharge speed so that the output resin can be easily fixed to the resin under it at the output immediately after that. Is it?

If so, I think it would be better to generalize, for example, to reduce the discharge speed after the discharge has not been performed for a certain period of time due to the moving speed.

The hash algorithm for file transfer was found.

I created a program that makes it easier to see the real numbers of slice parameters exported by FlashPrint with a text ...

Find out if Slic3r can be used with Adventurer 3

We investigated whether Adventurer3 could use free slicer software other than FlashPrint. In the beginning At first ...