The G code editing function created with the Adventurer3 controller has been extracted and released for independent use.

The program is written in C#, and the overall configuration is as follows.

ParseGCodeStream is the base class for analysis, and it is the class that implements the ICommandActor interface that actually performs analysis.

LineCommand reads one line from a file and stores the result of analyzing the information of the G code in that line. ICommandActor receives LineCommand and performs various processing. 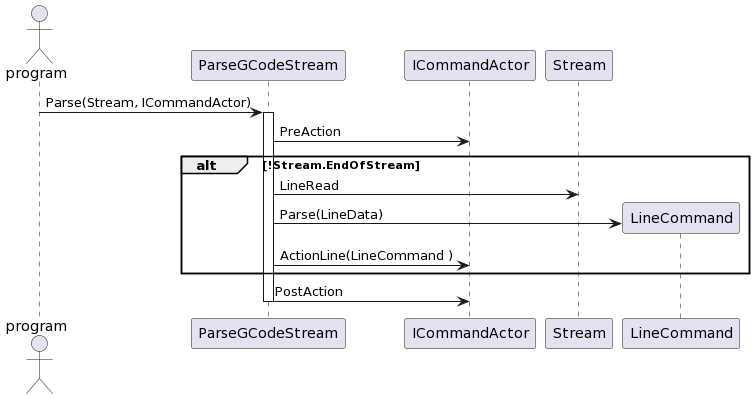 This is a base class for analysis, mainly using Parse method.

In ParseGCodeStream, read one line from the read file, analyze the code such as comments and XYZG in the one line, and construct LineCommand. I pass the LineCommand that I built to ICommandActor.

Readable files are ASCII text files. However, FlashPrint has binary information written at the beginning of the file, so it can not be read correctly if it is passed as it is.

Therefore, since we have prepared a method called SkipXGcode, it is possible to skip the leading binary information and continue the processing by passing it in advance.

Information that analyzes one line of G code file and makes it easy to use.

Identifiers and numerical values are managed by the ValuePosition class, and the information held includes the identifier (Key), the value (Value), the position of the field (Position), and the floating point number of digits (FP) .

You can also update ValuePosition data by using the Modify method.

Interface class for describing processing for G code, which is called from ParseGCodeStream.

In actual processing, prepare a class that inherits this interface and write it in it.

As for how to write, please use CalcGcode as a reference. Description of CalcGcode is described separately.

Temporarily, each value has the following meaning.

In your own ICommandActor derived class, it is better to hold ValueXYZEF and use it by calling it with PreAction () and ActionLine ().

A class that holds methods for outputting modified G code information to a file.

For example, you can use the following to output to the console the same contents as the read line.

As for coordinate values, the number of decimal places of ValuePosition is also used. Therefore, it is possible to output, for example, the one described as X 1.00 as X 1.00 without specifying anything.

I think that OutputGCode is often used in the case of outputting the result edited by LineCommand.Modify.

For example, if you add code to correct the information to the above code.

This is a command to output the result offset to the Z coordinate.

Please refer to Adventurer 3 controller for the processing content.

A class that creates G code files for Adventurer 3 by modifying files generated from FlashPrint and files converted from Slic 3r.

The parameters used at the time of conversion are held in ToAdventurer3Parameter, and temporarily targeted for serialization.

Parameters are prepared as properties.

When deserializing, the check of the set parameter is performed by the Check method. The result of this check is returned in Dictionary <string, string>. The key is the parameter property name, and the setting is an error message.

When serialized in json format, it is output in the following format.

BrimSpeedTypeValue is a brim speed setting method, and it is a selection value equivalent to 0, 1 or 2 not changing, changing by an absolute value, or changing by the ratio of data output in the file.

This is the class used internally. This is for reading and holding information on slice parameters set on the header side of the file when Simplify3D file is read.

The actual G code editing process is performed from the call from ActionLine.

The Z-axis movement speed in the file of Scli3r is corrected and the data is arranged to be able to pass it to ToAdventurer3.

In addition, Slic3rToBase can be serialized directly, and operation parameters are also held in this class. This was not separated into another class because there was only one parameter.

Here, as with ToAdventurer3, ParseGCodeStream is prepared and converted by itself in the Modify method. In order to read parameters to pass to ToAdventurer 3 in advance.

Unlike Simplify3D, the slice parameter of the file output by Scli3r is in the footer type, so it is read up to that beforehand to obtain the operation parameter, and then ParseGCodeStream.Parse is executed.

The actual G code editing process is performed from the call from ActionLine.

By the way, when serialized in json format, it is output in the following format.

Temporarily, keywords are different, so it can be mixed with parameters for ToAdventurer3 and can be operated with single file.

The following two files are input.

The file to be output is the file after data editing, and the extension is changed to gout and output.

It works as follows.

This is a sample program using the rs274ngcparser library, and implements the following contents.

About the difference between the movement time of the nozzle and the actual output time.

That means that the calculation algorithm for time with slicer is the same as this program.

Maybe because of the following reasons.

Since the value of E is reset by the G92 command, when E becomes 0 in G92, the value of E up to that point is stocked, and the total value is calculated by postAction.

Total movement of the nozzle.

If there is a G1 command, it is determined that XYZ is moved, and the distance to the current position is calculated from the previous XYZ value, and a total value is obtained.

Total movement time of the nozzle.

Project for unit testing of library

The parser I made this time does not have the specs of rs274ngc properly, and has been created with reference to past experience (I have programmed with the spec rs-274x) and G-code-RepRap.

Therefore, there may be a problem in the specification of rs274ngc, but I will consider it even then.

By the way, the processing itself that rs274ngc interprets has been quite old, and has been issued by NIST.