How to build the program and start the simulator on the command line.

The command has the following form.

After 3.2, the SDK is stored in the following folder.

The SDK is described in the following file.

In my environment, the following path names are specified.

C:Users\usr2\AppData\Roaming\Garmin\ConnectIQ\Sdksconnectiq-sdk-win-3.2.3-2020-10-13-c14e609bd
The jar file used in the build will use binmonkeybrains.jar starting from the above folder (hereinafter referred to as SDK base).

If the extension is prg, there seems to be no problem in creating it in any folder.

Specify the file specified in the Eclipse settings.

The program seems to be created for each device.
There is no program that is common to all devices. Therefore, it is necessary to directly specify the device to operate.

For the device name, use the product name described in manifest.xml in the Eclipse project.

Specify the monkey.jungle file name in the eclipse project.

For the build command, I refer to the output result that appears on the console screen when the program is started in Eclipse, so please refer to that when actually running it.

The executable format of the simulator is “SDK base\binsimulator.exe”.
Start this first.
When the simulator is running, specify the Garmin program and device name from the command line as follows.

The program and device information are loaded on the running simulator, and the simulator operates. 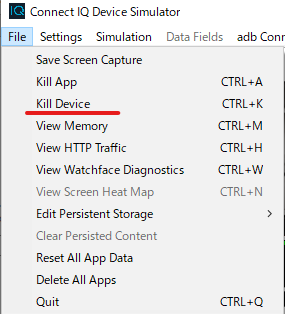 We examined how the performance changes depending on the implementation. Survey target Just displaying a circular ga...

I was creating a watch face and found that the font size was quite different on different devices, so I summarized it....

Tips for improving performance. See Creating a Garmin watch face: performance. After that, I also checked the forum ...

Creating a Garmin watch face: performance as a reference, let's take a quick look at what kind of implementation could...